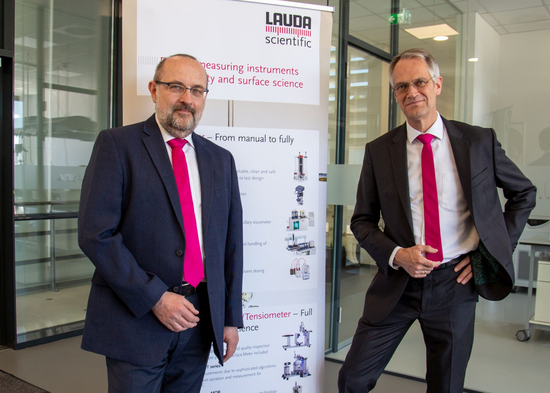 As announced by the manufacturer of precision Measuring instruments for polymers, surfaces, oils and surfactants, Dr. Jürgen Grebner (in the picture on the left) succeeded Philipp Neumann on 1 May 2020 and has been responsible for the worldwide sales of LAUDA Scientific since then. Philipp Neumann was employed at LAUDA for twelve years and is now taking on new responsibilities in his home town of Berlin.

Dr. Jürgen Grebner comes from the LAUDA Group and moves from LAUDA DR. WOBSER GMBH & CO. KG to LAUDA Scientific. At LAUDA he has been working as Sales Manager OEM since 2006 and has been in close contact with the LAUDA subsidiaries and worldwide OEM customers. Due to his achievements, he was appointed Deputy Head of the Constant temperature equipment division on 1 June 2010. He was also a member of the international management team. After the founding of the OEM division on 1 December 2013, Dr. Jürgen Grebner, as Sales Manager OEM, made a significant contribution to the successful path of this new business unit, of which he was Deputy Head until his move to LAUDA Scientific.

"We are very pleased to welcome Dr. Jürgen Grebner, an experienced sales professional, to our company", explains Dr. Ulf Reinhardt, Managing Director of LAUDA Scientific. "I am sure that he will make an important contribution to the positive further development of LAUDA Scientific GmbH with his many years of sales and management experience as well as his great expertise."